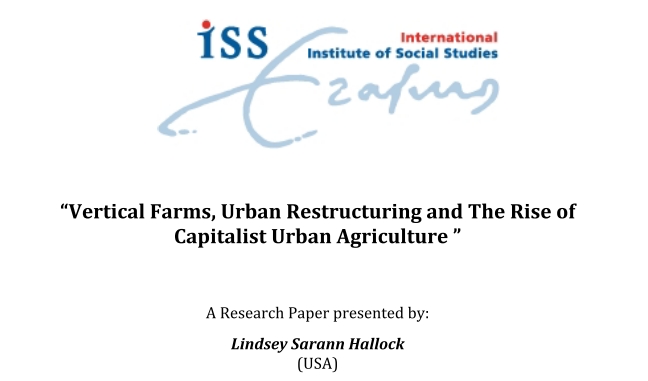 This paper seeks to examine the rise of vertical farms, and the ways in which they advance the corporate food regime and encourage urban elite consumption. It will discuss two contemporary ‘localizing’ trends: the call for local food systems and local urban restructuring in the era of neoliberalism. I argue that the intersection of these two trends, spatially and temporally, created market opportunities for capital to appropriate social movement demands for local agricultural production, and encouraged the rise of capitalist forms of local food production (vertical farms). I will first introduce the vertical farm concept and currently operating vertical farms referred to throughout the paper. Then, using a theoretical tool developed by Robbins (2013), I will differentiate these farms as local food projects that reproduce the capitalist industrial system, rather than challenging it. In the third chapter, I discuss the analytical frameworks used in the paper: uneven geographic development and food regime analysis. The next chapter discusses how class struggle produced the calls for local food movements, as a response to inequity in the global corporate food regime. I then detail how devalued built environments and labor surplus, characteristics of cities under “actually existing neoliberalism”, facilitated corporate appropriation of the local foods concept by producing profitable conditions for capitalist urban agriculture, which was hailed as local economic development. In the last chapter, I will discuss how these farms serve to reproduce troubling trends in the corporate food regime, and signify new developments in capital’s ability to standardize the food cultivation process, and to incorporate it into factory like production systems.