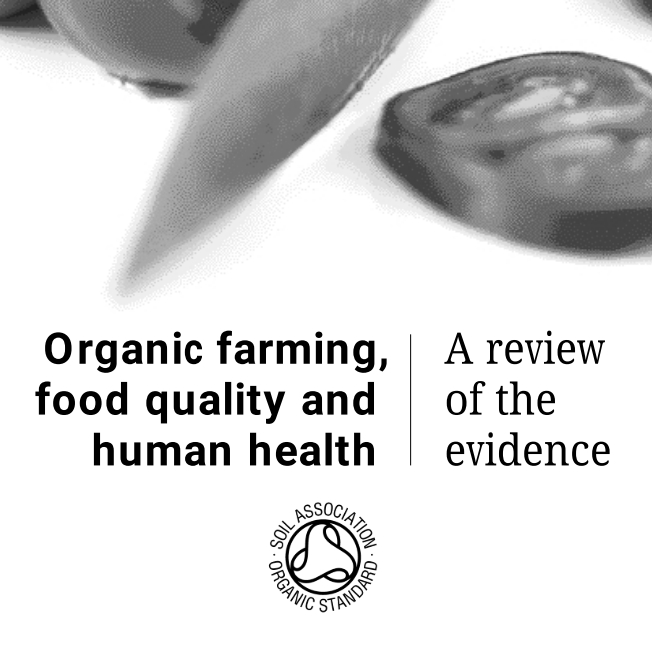 Record numbers of people are now eating organic, and many of them are doing so because they feel intuitively that they are making a more natural and healthy choice. This report assesses the evidence behind that intuition.
Sir Albert Howard, whose research in the 1930s did much to inform the development of organic farming and inspired the foundation of the Soil Association, believed the health of the soil, plants, animals and people was ‘one and indivisible’. But how much evidence is there to validate the hypothesis that farming methods have an important effect on the nutritional quality of the food we eat?

This report examines over 400 published papers considering or comparing organic and non-organic foods in relation to key areas of food quality important to the promotion of good health – food safety, nutritional content and the observed health effects in those consuming food. It points out that organic standards specifically prohibit the use of certain additives and manufacturing processes linked to health concerns such as osteoporosis and heart disease, and argues that there are no grounds for complacency about the long-term effects of pesticides and additives on our health. It asserts that there is indicative evidence suggesting nutritional differences between organic and nonorganic food. More research is needed, it emphasises, but if the indications of the available evidence are confirmed there could be major implications for public health.

These conclusions are sure to be controversial. They contradict Sir John Krebs of the Food Standards Agency, who said in August 2000 that “there is not enough information available at present to be able to say that organic foods are significantly different in terms of their safety and nutritional content to those produced by conventional farming”. Sir John’s comments rather echo those of the critics of the mid-1980s who said there was no evidence to justify the Soil Association’s decision to ban animal protein from feed for organic livestock. Within a few years Britain’s non-organic herds were being ruined by BSE, and the scientific evidence linking the disease with feed was all too abundant.

It is almost as if consumers have become laboratory animals in the huge experiment that is industrialised agriculture, storing up untold health problems for the future. Chemicals such as DDT and lindane have been banned after the initial dismissal of safety concerns. Research in animal feeding trials has indicated that health effects often only reveal themselves over long time spans, sometimes even over successive generations. So the evidence presented in this report showing nutritional differences between organic and non-organic foods should not be lightly dismissed. Nor should the food safety issues raised. The organic movement has repeatedly advocated the precautionary principle, questioning practices that violate the natural cycle and represent a potential threat to health.

It would be easy to criticise this report, as some surely will, on the grounds that the Soil Association is a partisan organisation. However in the midst of a distinctly illinformed debate, we have taken responsibility for bringing together the existing evidence and subjecting it to closer scrutiny than ever before. A number of scientists, organisations and experts in the fields of medicine, nutrition and organic research have endorsed our findings and recommendations and I urge you to read the report for yourself and draw your own conclusions.

Organic Farming, Food Quality and Human Health complements the strong environmental arguments for going organic presented in our previous report, The Biodiversity Benefits of Organic Farming. It is a compelling and challenging contribution to an important debate, which I hope will help all food producers to deliver healthier food, and enable consumers and governments to make informed choices in this time of crisis for our agriculture.