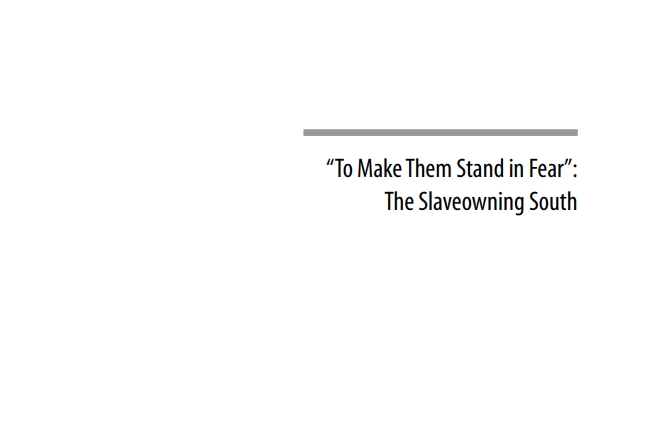 Thanks to the influence of the 1939 motion picture Gone with the Wind, many
white Americans still think of the Old South as a romantic land of magnolias and landscaped manors, of cavalier gentlemen and happy darkies, of elegant ladies and breathless belles in crinoline—an ordered, leisurely world in which men and women, blacks and whites, all had their destined place. This view of Dixie is one of America’s most enduring myths (Gone with the Wind still commands huge audiences when it runs on television). The real world of the Old South was far more complex and cruel.

Modern historical studies have demonstrated that antebellum Dixie was a rigidly patriarchal, slave-based social order that might have lasted indefinitely had not the Civil War broken out. At no time was slavery on the verge of dying out naturally.

Tobacco cultivation may have become unprofitable by the Revolutionary period, but the invention of the cotton gin in 1793 stimulated cotton production immeasurably and created a tremendous demand for slave labor.

Thanks to the cotton gin, slavery spread beyond the fertile black belt of Alabama and Mississippi, out to the Kansas-Missouri border, to the fringes of western Arkansas, and to south and east Texas. Although Congress outlawed
the foreign slave trade in 1808 (it simply continued as illicit traffic), the number of slaves rose dramatically so that by 1860 there were nearly 4 million in fifteen slave states, including Delaware and Maryland. Slavery remained profitable, too, as evidenced by the fact that in 1860 a prime field hand sold for $1,250 in Virginia and $1,800 on the auction blocks in New Orleans. A “fancy girl” went for as high as $2,500. Still, from the southern white’s viewpoint, the profitability of slavery was not the crucial issue. Had slavery proved too costly in its plantation setting, southerners would have found other ways to use slave labor and keep blacks in chains, to maintain white male supremacy in the region.

The slaveholding South was a brutal system that sought to strip black people of all human rights, reducing them to the status of cattle, swine, wagons, and other “property.” The slaveholders resorted to a complex “apparatus of control” by which they ruled the region. The symbol of their power was the ubiquitous whip, which, in the words of another historian, was calculated to make the slaves “stand in fear.” Yet, as we saw in the portrait of Nat Turner (selection 15), the slaves created survival mechanisms in the form of their families, black religion, and a slave underground, which helped them “keep on keepin’ on” in life under the lash. And they resisted, most of them did, by committing acts of terrorism (arson and sabotage) or day-to-day obstructionism, such as “accidently” breaking their hoes. As historian Deborah Gray White has pointed out, pregnant mothers sometimes conspired with midwives to abort their fetuses and even commit infanticide, so that their children would not suffer as they had. The slaves protested, too, in their songs and in their folk tales about how weak, clever animals (the slaves) could outwit larger, menacing animals (the masters).

To understand the antebellum South, one must remember that the region was divided into two distinct classes of white, slaveholders and non-slaveholders, with the latter constituting a majority of the white population. Non-slaveholders included poor whites— “po white trash,”“rednecks,” or “hillbillies,” in the vernacular of the day—who lived on impoverished subsistence farms in the unproductive hill country and pine barrens. The class also included middle-class yeoman farmers who raised crops for market and city-dwelling merchants, artisans, and day-laborers. Since slaveholding was a potent status symbol and a great means of wealth, most of these individuals aspired to own slaves and rise up in the class scale.

Compared to the slaveholders, all non-slaveholding whites were relatively poor. Slaveholders owned more than 90 percent of the South’s agricultural wealth; their average wealth was fourteen times greater than that of non-slaveholders. The planters, those who owned twenty or more slaves, were a minority in the slaveholding class—they numbered only 46,000 in 1860. Yet the planters owned most of the slaves and most of the agricultural wealth of their class and truly ruled the region. By stressing white racial supremacy and black inferiority and by playing on the fears of abolition, the ruling planters and their small slaveholding allies were able to unite poor whites, yeoman farmers and city dwellers behind the slave regime. In short, they successfully divided whites and blacks.

Despite the cruel nature of the slave system, African Americans, as black historian John W. Blassingame points out in the following selection, found ways to force the system to recognize their humanity, which compelled the planters to make compromises “in order to maintain the facade of absolute control.” Blassingame disagrees with those historians who have argued that the slave system was so brutal that it damaged African Americans irreparably, reducing them to infantile or abject docility. Even so, as Blassingame’s narrative shows, the slave system was cruel to the blacks— Blassingames’s description of the various forms of punishment is particularly harrowing.

Slavery left an indelible mark on both races. As African American historian Lerone Bennett Jr. wrote in his Confrontation: Black and White (1965): “Slavery, in sum, was a seed experience. The significant dimensions of the race problem, the special dynamism that gave [the racial upheavals of the 1960s] their special harshness, are reflections of eddies that lie deep in the mind and deep in the past. The Negro is what he is today because he was once held in slavery by white people. And white people are what they are today because they cannot forget, because Negroes will not let them forget, what they did yesterday.”